Navigate thru all the sub categories of the website

Established in 1970, the museum holds over 6,000 items relating to the Victorian era of Virden's history as displayed in the main house. The original home itself was constructed in 1888 and the three additional annexes were constructed at a later date to display items from the subsequent era's depicting our local heritage and culture. For pre-arranged group tours and special events, the staff is costumed in the attire of the era.

The museum hosts an annual “Museum Day” during the summer. It features discounted rates for tours, a BBQ lunch, and live music

The Museum is home to one of the most extensive antique automobile collections in North America and attracts thousands of visitors every year who take a walk into the past and relive many memories of yesteryear.

This two-story wooden residence in the village of Kenton, in the Rural Municipality of Wallace-Woodworth, was built in the early 20th century by local businessman Leander Lawlor. It later became a community museum, tours of which are by appointment only.

The Canadian Railway Station was constructed in 1900 after the original wood frame station burnt in 1899.  It has been restored and declared a heritage building in 1994.   It's unique fieldstone and overhanging eaves style was common with many rail stations in larger centers.

In the early years, many new immigrant farmers and businessmen would have first disembarked from the train at this location and passed through the doors of this station.

Today, it houses the Virden and Area Arts Council and the Virden Chamber of Commerce. Also included is an art gallery and a separate board room area. 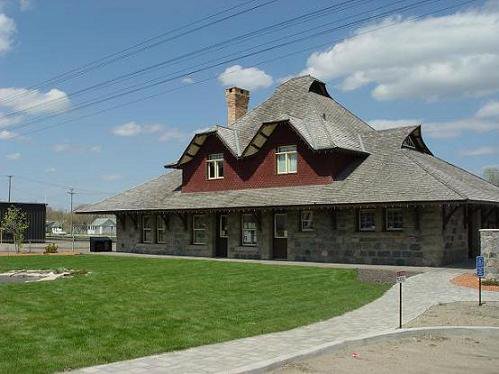 The Aud Theatre was built in 1911 as part of the municipal building.  The building was open to the public on February 29, 1912. The building consisted of a government telephone exchange room, a new courtroom, three large offices, and the opera house, costing $32,500.00.

The population at this time was about 1500. The Aud Theatre was built by W.T. Manser. The comedy "the Misogynist” was the first to play in the theatre. The Great Eastern Sign Painting Co. of Toronto supplied the 22x30ft curtain. During the ’30s and '40s, the Aud was a movie theatre.

The Ceiling on the stage was originally 40ft high but it was lowered to 24ft to save heat. The building was originally heated by steam which was replaced with electric heat in 1984-85 after the renovation and re-opening in 1983.  When the theatre fell into disrepair it closed as a movie theatre and the town council was preparing to demolish it.

A local steering committee was formed to save it, and after substantial renovations, it was re-opened in April 1983. The lower level consists of 257 seats and the upper level consists of 210 seats. The majestic curve of the balcony gives the audience a panoramic view of the stage. On either side, there are two double-decker boxes or loges which add an air of sophistication. 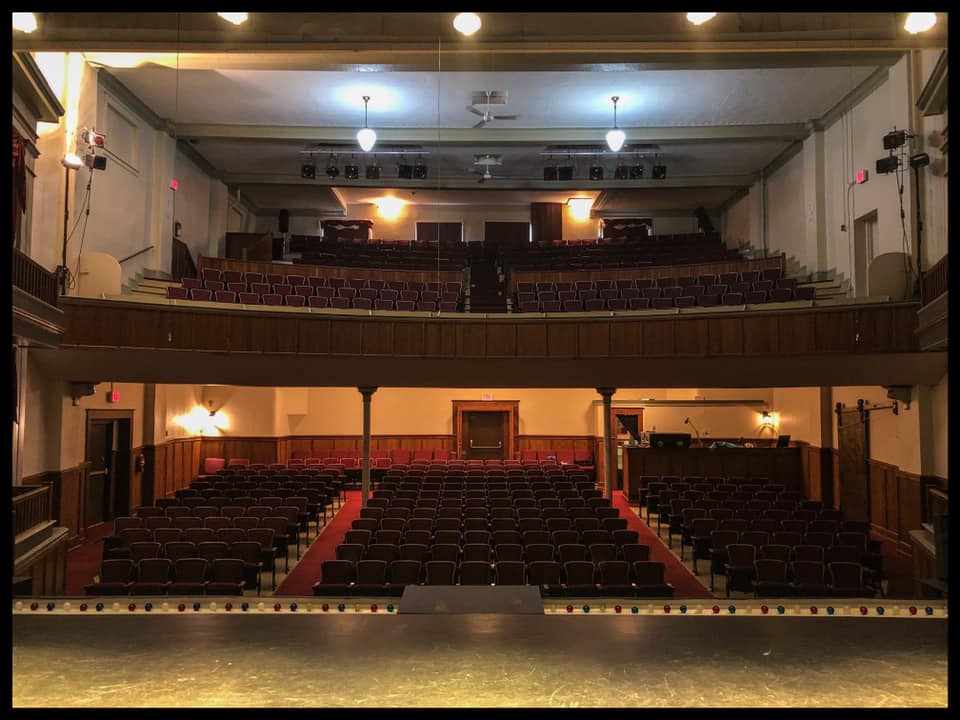 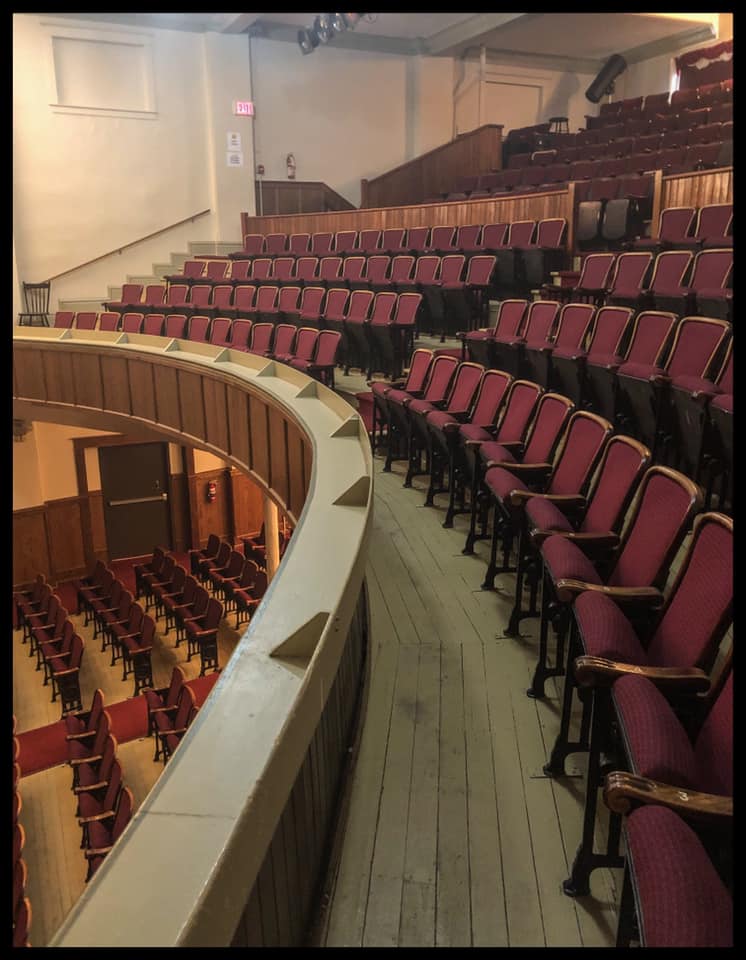 This structure is a great example of fieldstone construction. Much of the stone for the fieldstone construction came from along the top of the Assiniboine River Valley.  The first church was a frame structure built by Clayton& Sons in 1885. This was the first church building in Virden. Masonry work was done by Mr. Saul of Carberry with carpentry done by Mr. Harrington of Winnipeg. Walter Chesterton a Winnipeg architect designed this notable structure while building the school across the street. The cloister and fence were added in 1952. The church features two stained glass windows created by famous artist and sculptor Leo Mol. The church also features a stained glass medallion window. This window was presented by the city of Brugge, Belgium to honor the 12th Manitoba Dragoons. 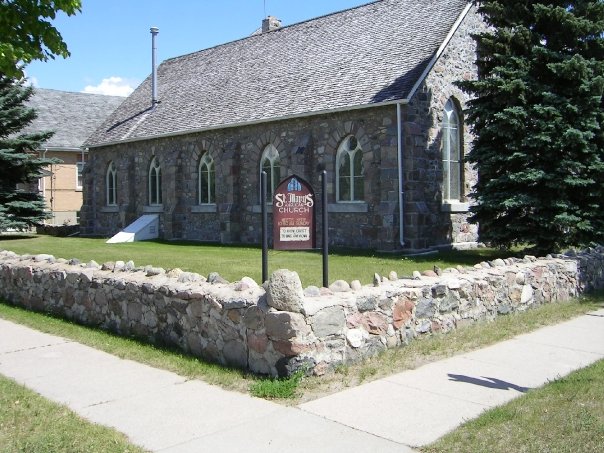 Today it is a private residence. Built in 1893 by Dr. Goulding, the fieldstone house represents a prime example of early prairie architectural designs with bi-level verandas and upper lookout.

Harvey Cathcart Simpson operated a large horse buying business. Mr. Simpson served overseas as a captain during World War I, and the Simpson brothers supplied mounts for the British Army during the Boer War. Mr. Simpson represented the Virden constituency in the Provincial Legislature from 1909 to 1914.

Formerly the Carmel Presbyterian Church from 1883-1900 until the property was sold to the Methodist Church. To make room for the Methodist Church on this site, this house was moved across the lane to become the residence of J.A. McLachlan, co-founder of the Virden Empire Advance.

This three-storey brick home was built by Marshall Bros. in 1906 for Dr. George Clingan, a graduate of Toronto Medical College, who practiced medicine in Virden for 46 years. Dr. Clingan was President of the Manitoba Medical Association from 1936-1937 and later was appointed as a senior member. Dr. Clingan served as mayor of Virden from 1908 to 1909 and represented the Virden constituency in the Provincial Legislature from 1914 to 1922.

This structure was built by W.T. Manser in 1914. It is constructed of bricks from the local Virden Brickyard and the floors were laid by local labour. The clock in the tower of the building was given by Sir James Aken and the bell weighs approximately 800lbs. The building, now called Scott Block, was the second post-office built in Virden and is now an apartment building.

This row house-type structure was built from Virden brick around 1890 and is similar to those found in the United Kingdom. It is certainly a rare sight for a prairie town.

The Presbyterian congregation of the Breadalbane district in western Manitoba was established in 1883. This impressive stone church in the RM of Wallace-Woodworth, a municipally-designated historic site, was constructed by stonemason C. B. Murphy in 1898. Next to it is a stone monument listing the names of pioneers to the Breadalbane district and their year of arrival between 1880 and 1900.

River Valley School District No. 879 was formally established in February 1896 with a stone school building. Named for its position in the Assiniboine River Valley northeast of Virden, the school opened with 33 students taught by Mr. Brokenshire, the minister at Breadalbane Church. The school was the educational and social centre of the area until it closed in 1955; the district was dissolved in July 1966. Renovations to the building since its closure have included the replacement of stones in its southwest corner with concrete and the bricking over of several window openings. The former school, along with a picnic area and campsite, are operated as a tourist site by volunteers of the River Valley Historical Society. A plaque mounted on the building door in 1995 commemorates Agnes Anderson for her years of service to the facility. A plaque on the building exterior, dedicated on August 3, 1996, commemorates the students, teachers, and families of the River Valley School District.

The Virden Story by Ida Clingan

Hard copies of these books are available for purchase at the Town of Virden Office for $5.00 each.

In the Spring of 2018, we welcomed the Residential Curbside Recycling Program. Do you feel that it has been successful so far?